The entire CYPSY24 Conference will be held at Norfolk State University, located in Norfolk, Virginia, USA. The university is located at the south-eastern portion of Virginia, close to the North Carolina border. Norfolk is approximately 200 miles (322 km) from Washington D.C., which is less than 1 hour by plane, between 3 and 4 hours by car depending on traffic, and about 5 hours by train (Amtrak). Norfolk International Airport is the closest option, but you will likely need a connecting flight from a larger travel hub, such as NY/NJ, DC, Raleigh, or Atlanta.The organizing committee encourages you to book a room before March 31st, 2019 to benefit from the conference special rate. Summer brings many tourists to both downtown Norfolk and the Virginia Beach oceanfront (20 minute drive) and hotels for June often sell out or become very expensive. 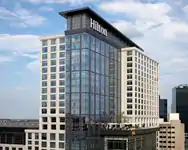 Lodging is conveniently located in the Downtown area of Norfolk, just minutes away from the campus by public transit or taxi / Uber. The conference hotel is the Hilton Main in Downtown Norfolk, which is only a few short minutes on the light rail from the campus. Room rates of $175 will be available for Monday June 24 and Tuesday June 25, as well as a limited number of rooms for Wednesday June 26. Reservations with the conference rate can be found here. There are several other hotels in the downtown Norfolk area should rooms at the Main sell out, but we may be able to request additional conference rate rooms upon request. Keep in mind, June and July is peak tourist season in the Norfolk and Virginia Beach area!

The downtown area is serviced by both bus and light rail, and we recommend using The Tide light rail for fast, convenient, and inexpensive service.Train tickets are purchased from machines at the station. There are no attendants at the stations, so checking the website ahead of time is recommended if you have any concerns. There is a Tide station within a 5 minute walk from the hotel (MacArthur Square Station) and a stop directly adjacent to the campus (NSU Station), which is a little over a 5 minute walk to the area of campus where the conference will be held. The hotel and campus are three stations apart (about 10 minutes), making for a short and easy morning travel to the conference. Door to door, the commute is about 1.5 miles (about 2.4 km). The light rail schedule can be found here.

CYPSY24 will be held at Norfolk State University, located at 700 Park Avenue, Norfolk, Virginia, USA. A map of the campus can be found here. Details about conference sessions will be posted soon. Note, there are two TIDE light rail stations that service the campus. On the campus map, the stations are closest to building 15 on one end of the campus and building 17 on the opposite end. The stations are adjacent to the campus, not directly on the campus.